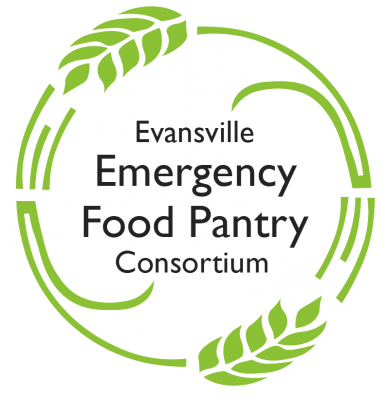 Each individual receives enough food to make 12 meals a month.

The EEFPC has seven different locations across Evansville.

The Evansville Emergency Food Pantry System, or Consortium, was founded in 1969. The Evansville Area Community of Churches (EACC) and St. Vincent de Paul Society teamed up to form the Food Pantry System. In 1981, a reliable source of donated and discounted food was needed to supply the Food Pantry System and the Gleaners Food Bank in Indianapolis was called upon. This affiliation formed the Tri-State Food Bank. In 1986, The Tri-State Food Bank became the chief coordinating agency for the food pantries. In 2013, The EEFPC was granted incorporation status. In 2014, the call center was formed to be able to handle referral calls for food.

Local people in the Evansville Community are hungry and need your help. One third of those that are hungry are children. The Consortium does receive financial support from the Government (Emergency Food and Shelter Program, EFSP). This makes up almost 1/3 of the dollars needed. The EEFPC relies on churches and individual donations to make up the rest. Any and all monetary donations are appreciated.

If you are interested in learning about volunteer opportunities, please send us a message.

We would like to thank all those whose generous support has has made the COVID-19 fund possible! Also, everyone in the community who has generously donated to our Consortium.